Shirdi
Shirdi is a highly venerated town not only by the local people but also by the people from all parts of the country. It is one of the most significant pilgrimages for the Hindus and Muslims alike. This place is acclaimed for its spiritual importance and the eminent saint Sai Baba spent the most important part of his life here. This sacred place is strewn with a number of pilgrimage spots including the Sai Baba Temple, Shri Khandoba Mandir, Dwarkamai (Mosque), Chawadi, Lendi Baug, Samadhi of Abdulbaba and Maruti Temple.... 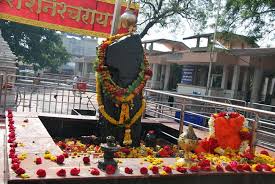 Shani Shinganapur
Shani Shinganapur is a village situated at a distance of 6 kms from Ghodegaon on Aurangabad Ahmedanagar road in Maharashtra. It is 84 Kms from Aurangabad.From Ghodegaon, there is a motorable tar road leading to the Shri Shaneshwar and is open in all the seasons.
Ajanta Caves
Chiseled during the span between the 2nd century BC and the 8th century AD, the Ajanta caves are one of the most alluring tourist destinations in India. Your tour to India is, in fact, incomplete without a trip to this wonderful tourist site near the city of Aurangabad in Maharashtra.

Ellora Caves
Ellora 29 km (18 mi) North-West of the city of Aurangabad in the Indian state of Maharashtra built by the Rashtrakuta dynasty. Well known for its monumental caves, Ellora is a World Heritage Site.Ellora represents the epitome of Indian rock-cut architecture.
Daulatabad Fort
Almost 800 years ago, Daulatabad, then called 'Devigiri' was a thriving city. It was founded by Bhillamraja of the Yadava dynasty in 1187 AD. Later, the fort of Daulatabad passed through the hands of several dynasties in the Deccan. Less than 150 years after the Yadava dynasty, Daulatabad also became the capital of India for a short period during the reign of Sultan Muhammad-bin-Tughluq, who gave the city its present name. But very soon the charm of this ancient city faded.

Bhadra Maruti - Khultabad
Bhadra Maruti Temple, Khuldabad is a temple dedicated to the Hindu deity Hanuman, located at Khuldabad, near Aurangabad, Maharashtra. The temple is located four kilometers from the Ellora caves.At this temple, the idol of Hanuman is portrayed in a reclining or sleeping posture.It is one of only three places where Hanuman is represented in a sleeping posture.
Grishneshwar Temple
The Grishneshwar Jyotirlinga Temple is one of the ancient and holiest shrines of India. This temple is the holy abode of one of the 12 jyotirlinga of Lord Shiva. The temple is located at a distance of 11km from Daulatabad near Aurangabad in Maharashtra. Daulatabad was once known as Devagiri. Ahilyabhai Holkar constructed the Grishneshwar Temple, who also re-constructed the Kasi Viswanatha temple at Banaras and the Vishnu Paada temple at Gaya.

Bibi Ka Maqbara
This inscription tells us that the tomb was designed by Ata-ullah, an architect, and constructed by Hanspat Rai, an engineer. The marble used in its construction is said to have been brought from the mines situated near the 'Pink City'. The design of the Bibi Ka Maqbara has largely been based on the Taj Mahal of Agra. However, it could not rival the magnificent 'Monument of Love' and was reduced to a poor imitation. Still, the mausoleum is today known as the 'Taj of Deccan'.
Paithan
Paithan is a village in Aurangabad. It is located 56 km south of Aurangabad. It is the ancient capital of Satvahanas. The hamlet is famous for its 6 yards silk brocade sarees. The name of the saree is also Paithan.

Panchakki
Panchakki otherwise known as the water mill was built during the early years of the 17th century. The mill used to grind grains for the pilgrims. It was so designed that it generated energy through water which was brought from a spring on a mountain.
Sai in Dhoop Gaon under the neem tree
It is believed that Shri Sai Baba (of Shirdi) visited this village before he settled down in Shirdi. A Neem tree under which he sat is known to have sweet leaves. Some antiques and articles have been preserved in the temple premises here.

Mhaismal
Mhaismal, also spelt as Maheshmal, is a small hill station, situated at an altitude of 1067 m, in Aurangabad District of Maharashtra. It is about 12 km from Khuldabad on the way to Ellora caves.
Hotel Technology Partner: BookLogic